We’ve all heard of the Oscar issue in 2022, when Will Smith slapped Chris Rock after he made a joke about the condition of Will’s wife, Jada Pinkett Smith.

Will Smith and Jada Pinkett Smith have been married since 1977 and have two children together, Willow and Jaden. The two are close to each other and support each other, although it is known that they have an unusual relationship.

Will Smith couldn’t help but joke that Chris Rock was joking about his wife’s condition, which is why he reacted aggressively. He took the stage and slapped Chris Rock in front of all the participants in the event. Will probably thought that joke would affect Jada, her emotional state being quite weak due to the disease.

What was Chris Rock’s joke about? He said he can’t wait to see Jada Pinkett Smith in “G.I. Jane 2 “, referring to the actress’ shaved head. That was when Will Smith took the stage, shouting” Don’t mention my wife’s name in your filthy lips! “.

However, Chris Rock remained calm to avoid a bigger quarrel between him and Will Smith, so he did what he knew best, joking, saying “Will Smith just hit me hard!” and ended by saying, “This was the hottest night in television history.”

However, we should be careful when we say something, even if we want to say it as a joke because our words can affect others without us realizing it.

Everyone has their own difficulties in life that we do not know about, so it is good to be careful when we say something.

Certainly Jada is struggling with the condition she is suffering from and is trying to find peace and accept the situation she is going through, but it is a difficult and long process.

Probably both Chris and Will were wrong and this uncomfortable situation should not have been reached, even for Jada who was the reason for the quarrel. 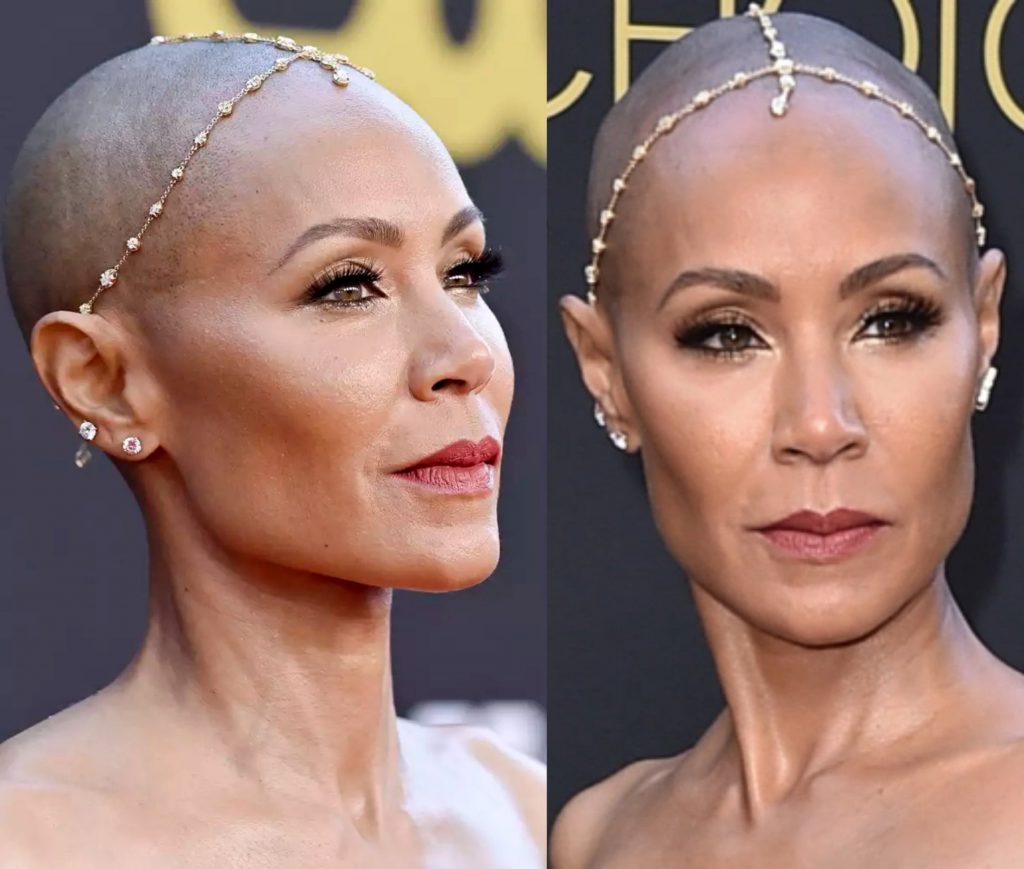 Jada Pinkett Smith suffers from a rare autoimmune condition that has caused her to lose all of her hair. It is certainly very difficult to live with this condition, especially in a society where women are judged for their appearance. Anyone who follows Jada on social media knows that she wears turbans to cover the effects caused by this disease she suffers from.

Jada said that at one point she was in the shower and she was left with a very large amount of hair in her hand. This incident would be shocking for everyone, especially for a woman. She said that her hair started to fall out more and more and this worried her. Hair loss is very hard and can certainly affect a person emotionally.

Jada said that although she is still scared of her condition, she learns to accept it and looks for solutions that will make her feel better in her own skin. She feels inspired by other women who are going through the same situation as her, but do not have the support and resources to reduce the effects of the disease. She also thinks that there are women who go through much more difficult situations, such as cancer or the loss of a child, which is why she tries to be grateful for what she has and not let the problems overwhelm her. She knows how strong those women are and follows the power of example in her life.

Jada thinks very healthy. We should be grateful for what we have and never stop fighting our problems. We should also always be empathetic with those around us and try to help them if we can do that.