Anytime you work in the service industry, you are going to have to deal with your fair share of problems. It is especially true when you are dealing with people who might be a little bit irritated and flight attendants fall into that category. Even though you are dealing with frustrated individuals, you still have to have a smile on your face but you might have some choice words for them going through your mind. Every once in a while, you get the opportunity to let that inner person out and that is what happened with this male flight attendant. He ran into a pushy, rich passenger and his words are going to have you laughing out loud:

A gay flight attendant had a very interesting way of dealing with a snobbish passenger who refused to put their tray up for landing.

This woman was asked to raise her tray by the flight-attendant but she didn’t budge and instead spoke condescendingly.

You’ll never guess what he said.

My flight was being served by an obviously gay flight attendant, who was camping it up outrageously. He seemed to put everyone in a good mood as he served us food and drinks.

As the plane prepared to descend, he came swishing down the aisle and told us: 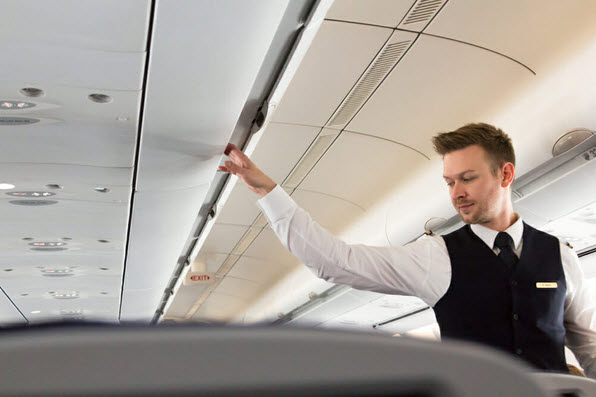 “Captain Marvey has asked me to announce that he’ll be landing the big scary plane shortly, so lovely people, if you could just put your trays up, that would be super.”

On his trip back up the aisle, he noticed an extremely well-dressed and exotic young woman hadn’t moved a muscle.

“Perhaps you didn’t hear me over those big brute engines but I asked you to raise your tray, so the main man can pitty-pat us on the ground.”

She calmly turned her head and said, “In my country, I am called a Princess and I take orders from no one.”

To which the flight attendant replied, without missing a beat:

“Well, sweet-cheeks, in my country I’m called a Queen, so I outrank you. Tray up, Bitch.”